Home   › Time to move on from Whatsapp to Signal

Time to move on from Whatsapp to Signal

The Signal app is free to download and was developed to send encrypted text, image, audio, and video messages for individuals and groups. It can also be used for encrypted phone calls between Signal users for mobile users. Here’s a quick look at what this app is all about, and why there’s been a sudden surge of new users for it. What is Signal? Signal is a communication app that supports messaging, voice and video calls, and more. It’s fully cross-platform, free, open source, and features end-to-end encryption. This makes it a popular choice for users looking for enhanced privacy and security.

Who created the app?

The app is developed by the Signal Foundation and Signal Messenger LLC and it is a non-profit company. The app was created by Moxie Marlinspike, American cryptographer and currently CEO of Signal Messenger.

The origins of the Signal app go back to 2010, when a company called Whisper Systems first launched two Android apps: One was TextSecure, which encrypted text messages, and the other was RedPhone, which did the same for voice calls. In 2011, the company was bought by Twitter and the apps were released as free open-source software.

WhatsApp vs Telegram vs Signal:

Which messaging app should you use? In 2013, one of the founders of Whisper Systems, Moxie Marlinspike, departed Twitter. He formed another startup, Open Whisper Systems, and continued to develop TextSecure and RedPhone. In 2014, it was announced that the company would merge the two apps into one, with the new name Signal. In 2018, Marlinspike and WhatsApp co-founder Brian Acton formed the non-profit Signal Foundation to continue the development of the app, and to keep it free and open-source software. Recently, there’s been a surge of new downloads for Signal. Most people believe it’s due to changes at another popular encrypted messaging service, WhatsApp. In early January 2021, WhatsApp revealed that it will change its terms and services agreement, saying that it will start sending personal data to its parent company Facebook. This will begin officially on some time in 2021.Obviously, many WhatsApp users don’t like this upcoming change and have moved onto other chat apps like Signal.

What platforms support the app? Signal is available for iOS and Android devices and is also available for PCs running on Windows, MacOS, and Linux. The program is also open-source, so developers are encouraged to create their own clients.

What are some of the privacy features on Signal?

Signal has plenty of privacy-focused features. For one, Signal’s privacy settings have an option of ‘Relay Calls’ where the calls go through a Signal server to avoid revealing your IP address to your contact. But enabling this does reduce call quality, according to Signal, and might not be necessary for everyone.

Signal also has a Screen Lock feature, where you can rely on Touch ID, FaceID or your iOS device’s passcode to access the app. However, incoming calls and message notifications can be answered even if the Screen Lock is enabled.

What data does Signal collect?

If you look at the Signal app’s privacy nutrition label on Apple’s App Store, the only data that is collected is ‘Contact Info’, which is the phone number. According to Signal’s privacy policy, it is “designed to never collect or store any sensitive information.” All messages and calls on the app are end-to-end encrypted, meaning no third-party, nor Signal can access them. 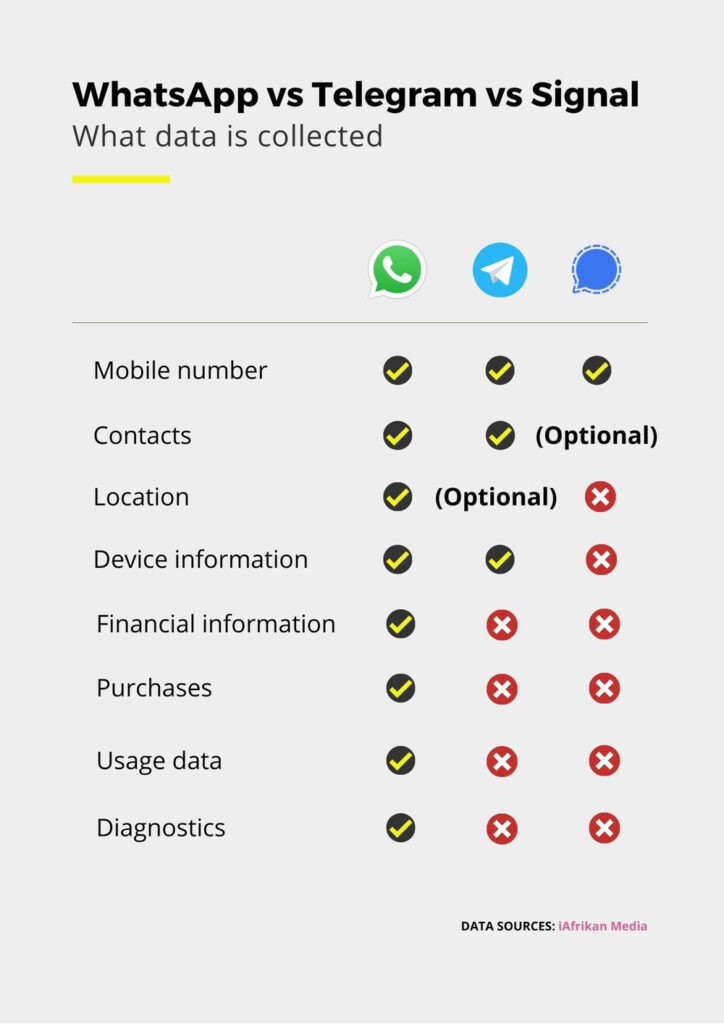