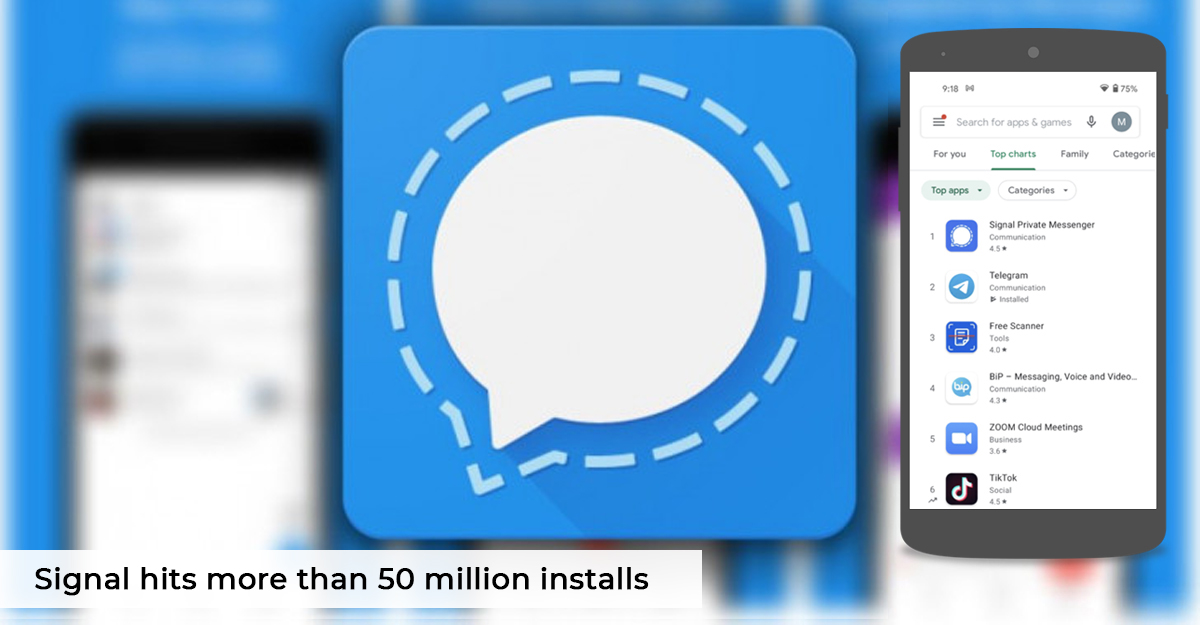 WhatsApp’s new terms of service have resulted in an exodus of users moving to alternative, “more secure” messaging services. While there are a bunch to choose from, Signal seem to be the most popular of all.

WhatsApp has been reaping the whirlwind ever since it rolled out its new terms of service, which give parent company Facebook more control over user data. While some users aren’t as bothered, others definitely don’t seem comfortable with the accept-or-die ultimatum served by WhatsApp. Resultantly, Signal — an alternative, more secure messaging app — has gained some incredible traction in the last few days, placing itself at the top of charts on both the Google Play Store and the Apple App Store in various countries.

Signal is an encrypted messaging service that has been endorsed by the likes of Edward Snowden and Elon Musk. Compared to services such as WhatsApp and Facebook Messenger, it doesn’t collect any metadata that can be linked back to the user and also encrypts all sorts of communication: voice calls, video calls, and messages.

The app hit the 50-million mark shortly after it topped app store charts around the world. It gained momentum after users took to social media to criticize WhatsApp’s new policy. On Sunday (January 10) alone, about 810,000 users globally installed Signal, according to research firm Apptopia. 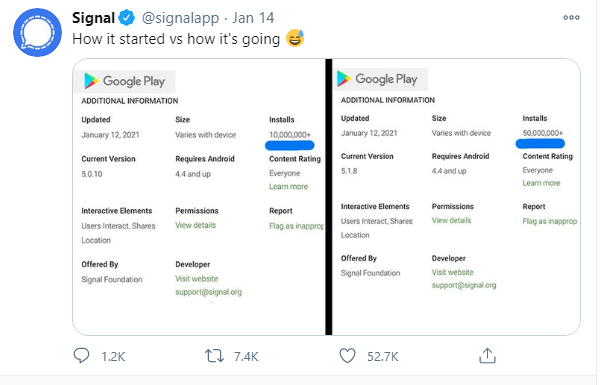 To keep up with the expectations of the newly-arrived users from the feature-rich WhatsApp, the encrypted messaging service is also actively working on expanding its feature set. It recently increased the group call limit from five to eight and is in the process of rolling out features such as chat wallpapers and animated stickers.

At the time of writing, Signal sits at the numero uno position on the Play Store in the US, the UK, Germany, Lebanon, and France, among others. In other countries such as India, Brazil, and Singapore, the messaging service finds a spot in the top three.

The spurt in the app’s popularity can be attributed to a push from privacy advocates globally who have concerns regarding the recent developments at WhatsApp. Signal is end-to-end encrypted, and its encryption software is open source, which inspires more confidence as it is widely peer-reviewed for bugs, flaws, and vulnerabilities. Unlike competing services, it also doesn’t collect metadata that can be linked back to users.

Signal is the new gold standard because of how little data it keeps about its users. At their core, both apps Signal and WhatsApp use cryptography to make sure that the messages, images and videos they carry can only be seen by the sender and the recipient — not governments, spies, nor even the designers of the app itself. But on Signal, unlike on WhatsApp, your messages’ metadata are encrypted, meaning that even authorities with a warrant cannot obtain your address book, nor see who you’re talking to and when, nor see your messages.

Signal is an open source software which means app’s source code has been made publicly available by its copyright holder so that app can be independently audited for errors and to ensure that it isn’t doing something it shouldn’t. Signal was fully independently audited in 2016 and was found to be cryptographically secure.