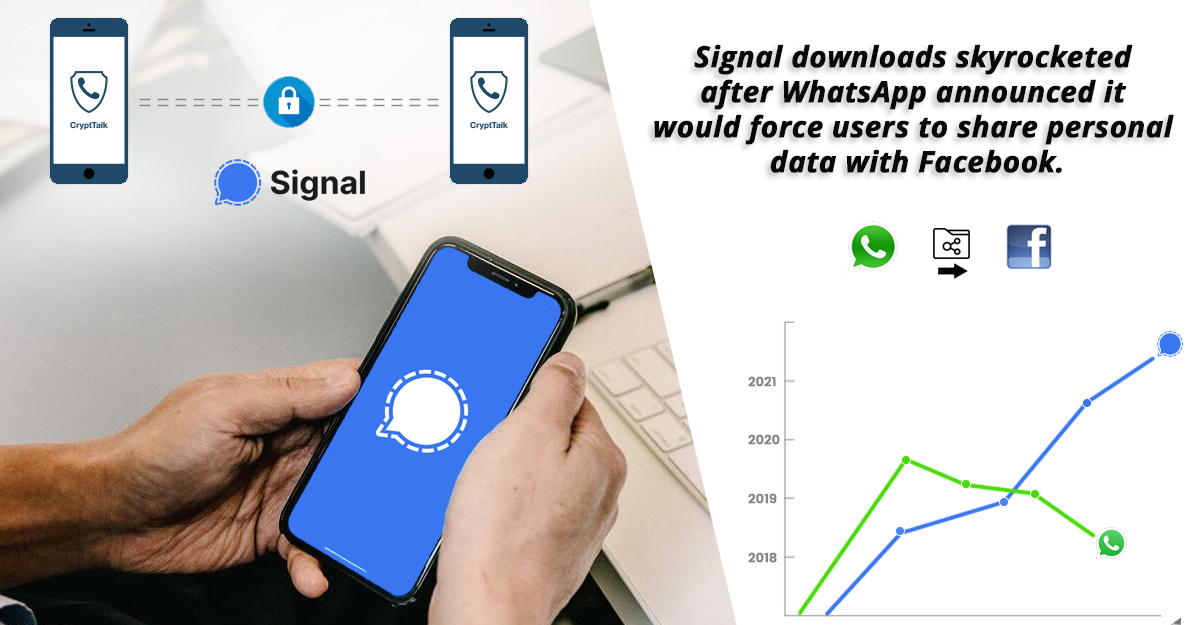 WhatsApp competitors have witnessed a surge in usage ahead of the implementation of the Facebook-owned messaging platform’s controversial privacy policy update.

According to data from Sensor Tower, WhatsApp rivals have witnessed nearly 1,200 per cent growth in the first four months of 2021 after WhatsApp announced the update in January.

Following the backlash, it had postponed the deadline for users to accept the update to its privacy policy and terms of service by three months, with the new options now being made available on May 15.

Signal have witnessed a surge in usage following the announcement. In the first four months of 2021, Telegram’s installs increased 98 per cent year-over-year to over 161 million, while Signal witnessed a surge of 1,192 per cent YoY in first-time downloads to 64.6 million, Sensor Tower said.

Meanwhile, global installs of WhatsApp’s mobile app declined 43 per cent YoY for the January to April duration. However, it still outdid its competitors with nearly 172.3 million installs. 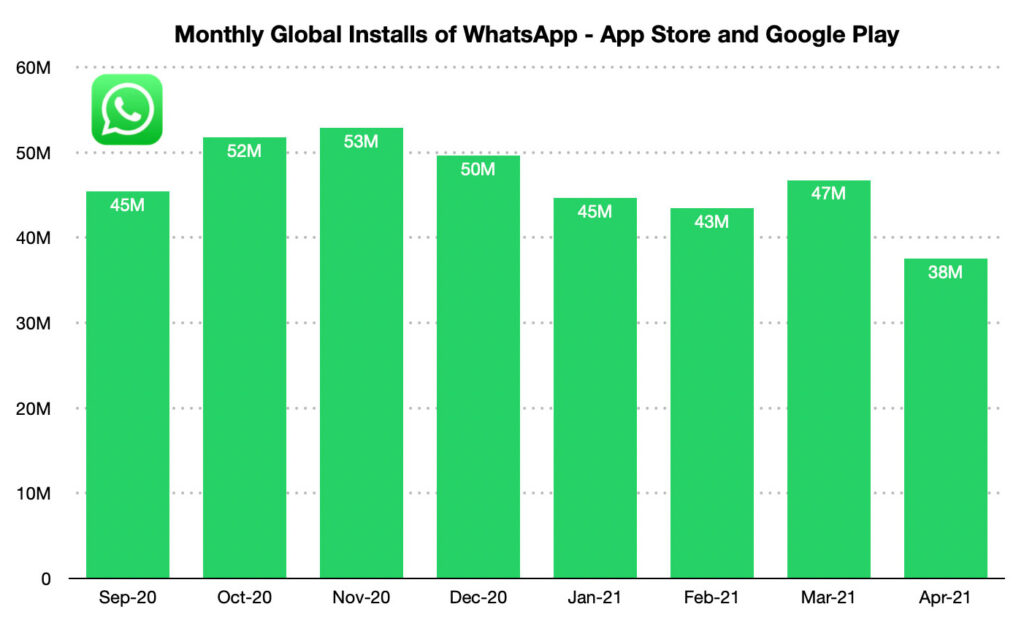 WhatsApp rivals Signal and Telegram saw a nearly 1,200 percent growth ahead of the Facebook-owned instant messaging app’s May 15 deadline to accept a contentious privacy policy update, according to a report. Although WhatsApp recently took a step back and scrapped its last deadline, the public outrage that started in January has helped its two close alternatives attract new users. Both Signal and Telegram also utilised the outrage and took to social media platforms like Twitter to speak against WhatsApp’s privacy policy. The alternative messaging apps also promoted their privacy aspects to gain over WhatsApp. 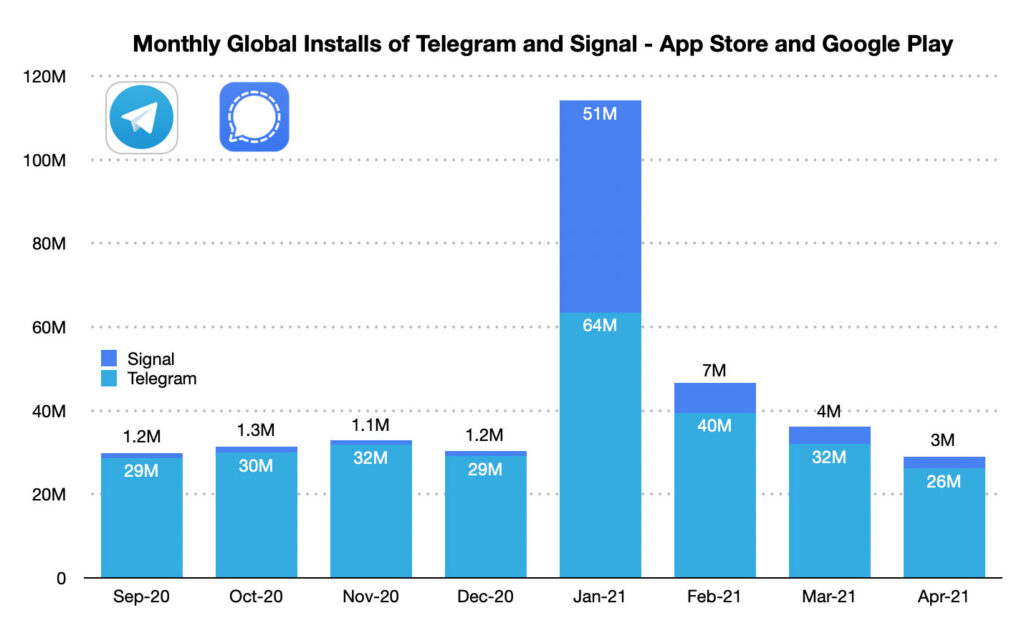 As for WhatsApp, the app’s first-time installs witnessed a decline even before it received a backlash for its mandatory privacy policy, owing to the Covid-19 pandemic. In April 2020, the app recorded nearly 55.2 million installs globally, down 28 per cent MoM from 76.5 million in March.

The company has now updated its FAQ page detailing deadlines for users to accept the policy and the steps that it will take.

“No one will have their accounts deleted or lose functionality of WhatsApp on May 15th because of this update,” reads the page.

“For the last several weeks we’ve displayed a notification in WhatsApp providing more information about the update. After giving everyone time to review, we’re continuing to remind those who haven’t had the chance to do so to review and accept. After a period of several weeks, the reminders people receive will eventually become persistent,”nit said. 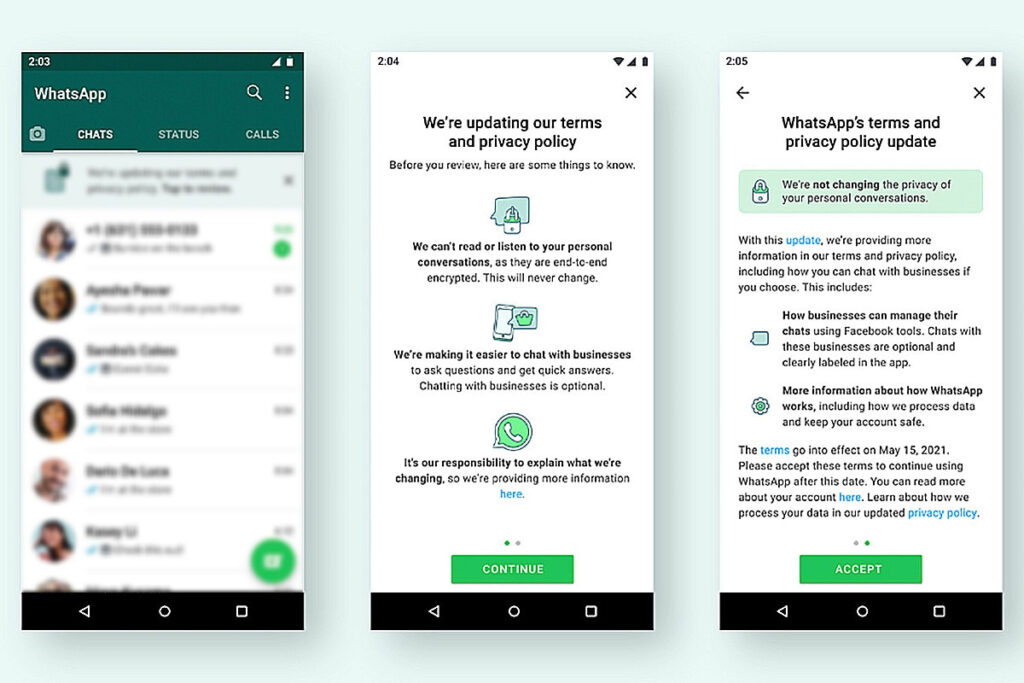 Users who receive the persistent reminder will encounter limited functionality on WhatsApp until they accept the updates.