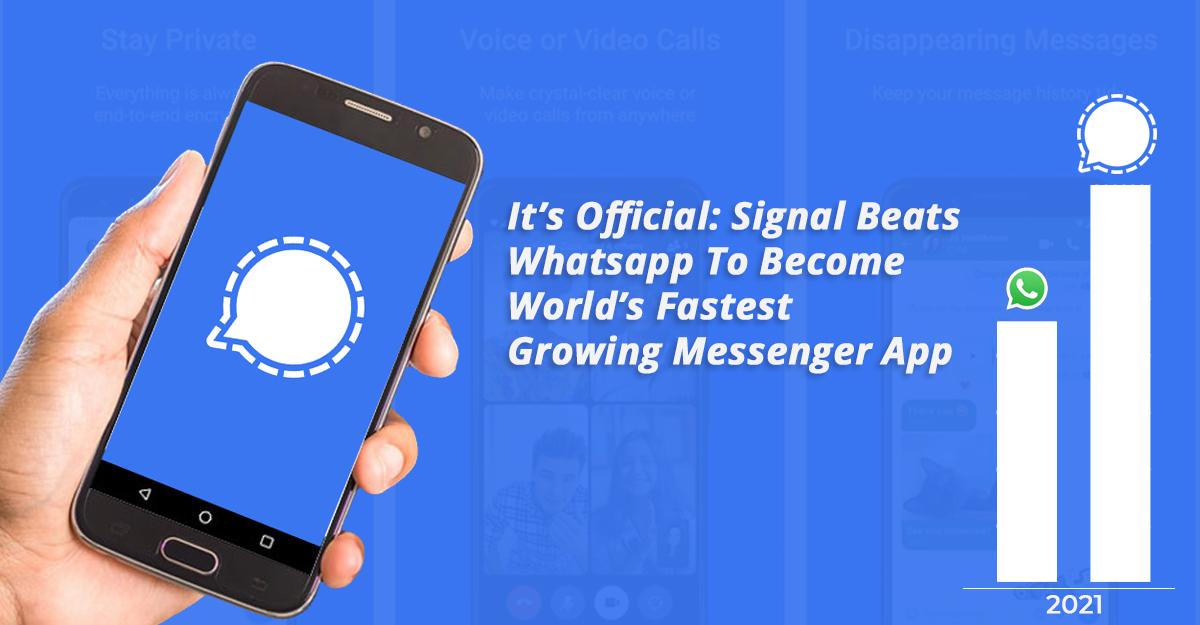 In the light of controversial privacy policy of WhatsApp, people have started finding alternatives and also are resorting to other apps. Rival of Whatsapp, Signal was lauded by billionaire entrepreneur Elon Musk is getting being received well by people.

Due to this, the original announced date by WhatsApp to accept the privacy policy is not only being delayed, but now more than ever more and more people are moving to Signal. Both in terms of downloads as well as monthly active users in the first quarter of the year, Signal has become the fastest growing app worldwide.

Telegram is yet another app which is being extensively worldwide as an alternate to WhatsApp.  The feature-rich app may not be as simple to use as WhatsApp but is useful in more ways than one. According to the downloads as per the report, it stands at number 3 in the world. As far as its MAUs (Monthly active users) are concerned, it is at 2nd number globally as it has more monthly active users than Telegram.

The messaging platform has taken a sucker punch due to the bizarre privacy policy. We all know that one man’s loss is another man’s gain. Hence, Signal and Telegram are being downloaded more and more in these days. Signal trumps Telegram as far as simplicity is concerned whereas the latter gives a better feature-rich experience.

This does not mean that Signal lacks features as it offers a built-in image editing tool that enables its users to crop and flips their photos, fast operability and a cool dark mode which gives it a panache and urbane feel. With a rating of 4.5 stars, it has been totally installed in 50,000,000+ times.

Both Signal and Telegram are chat apps with all the standard features, from stickers to photo and file transfers to voice and video calls.

Signal is built from the ground up for privacy, and it shows. All conversations and other communications on Signal are end-to-end encrypted between devices running Signal. The company in charge of Signal, the Signal Foundation, couldn’t even see your messages if it wanted to.

Telegram offers optional end-to-end encryption. You have to start a “Secret Chat.” In Signal, everything is a secret chat—by default, and always. All Telegram messages are encrypted between you and the Telegram server, but the company in charge of Telegram could technically view your messages on its server if it liked—unless you start a “Secret Chat.”

Also, in Telegram, you can’t have a group “Secret Chat.” You can only get end-to-end encryption in conversations between two people. Unlike Telegram, Signal offers encrypted group chats.

All your Signal conversations are stored only on your device by default. In Telegram, they’re stored on Telegram’s servers and can be synchronized between your devices. (You can still use Signal between multiple devices and synchronize messages from one device to another. But you can’t just log into Signal on the web and find all your conversations right there.)

The Signal app is developed by the Signal Foundation, a non-profit organization founded by donations. Telegram is run by a for-profit corporation and has wrestled with a variety of plans to make money, including an ill-fated cryptocurrency offering.

Signal also has other built-in features around privacy, including the ability to automatically blur faces in the photos you send.